skip to main | skip to sidebar

This is the work of Mark Levin, former attorney who worked in the Reagan Justice Department as chief of staff. If you aren't familiar with him or his radio show, give him a listen. www.marklevin.com or listen on any number of stations like www.abc.com or www.wntp. Over the past few months I've come to respect him enormously and he's funny. And he loves dogs. 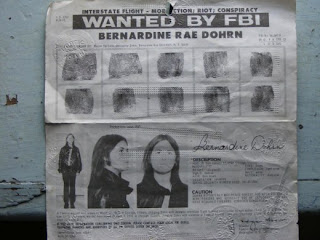 worked with Michelle in the same law firm for a period of time. But Barry lies and says Ayers is just a guy from the neighborhood, someone he hardly knew. That lie will be put to rest when Stanley Kurtz finishes with the Annenberg papers just released this week.

7 October 1969 – Bombing of Haymarket Police Statue in Chicago, apparently as a “kickoff” for the “Days of Rage” riots in the city October 8-11, 1969. The Weathermen later claimed credit for the bombing in their book, “Prairie Fire.”

8-11 October 1969 – The “Days of Rage” riots occur in Chicago in which 287 Weatherman members from throughout the country were arrested and a large amount of property damage was done.

6 December 1969 – Bombing of several Chicago Police cars parked in a precinct parking lot at 3600 North Halsted Street, Chicago. The WUO stated in their book “Prairie Fire” that they had did the explosion.

27-31 December 1969 – Weathermen hold a “War Council” meeting in Flint, MI, where they finalize their plans to submerge into an underground status from which they plan to commit strategic acts of sabotage against the government. Thereafter they are called the “Weather Underground Organization” (WUO).

16 February 1970 – Bombing of Golden Gate Park branch of the San Francisco Police Department, killing one officer and injuring a number of other policemen.

6 March 1970 – Bombing in the 13th Police District of the Detroit, Michigan. 34 sticks of dynamite are discovered. During February and early March, 1970, members of the WUO, led by Bill Ayers, are reported to be in Detroit, during that period, for the purpose of bombing a police facility.

6 March 1970 – “bomb factory” located in New York’s Greenwich Village accidentally explodes. WUO members die . The bomb was intended to be planted at a non-commissioned officer’s dance at Fort Dix, New Jersey. The bomb was packed with nails TO INFILICT MAXIMUM CASUALTIES UPON DETONATION.

30 March 1970 – Chicago Police discover a WUO “bomb factory” on Chicago’s north side. A subsequent discovery of a WUO “weapons cache” in a south side Chicago apartment several days later ends WUO activity in the city.

10 May 1970 – Bombing of The National Guard Association building in Washington, D.C..

21 May 1970 – The WUO under Bernardine Dohrn’s (Ayers’ current wife) name releases its “Declaration of a State of War” communique.

6 June 1970 – The WUO sends a letter claiming credit for bombing of the San Francisco Hall of Justice; however, no explosion actually took place. Months later, workmen in this building located an unexploded device which had apparently been dormant for some time.

6 March 1974 - Bombing of the Department of Health, Education and Welfare offices in San Francisco

31 May 1974 - Bombing of The Office of the California Attorney General.

11 September 1974 – Bombing of Anaconda Corporation (part of the Rockefeller Corporation).

September, 1975 – Bombing of the Kennecott Corporation .

October 20, 1981 - Brinks robbery in which several members of the Weather Underground stole over $1 million from a Brinks armored car near Nyack, New York. The robbers murdered 2 police officers and 1 Brinks guard. Several others were wounded.

1981 “Guilty as hel*. Free as a bird. America is a great country,” Ayers said when interviewed by David Horowitz.